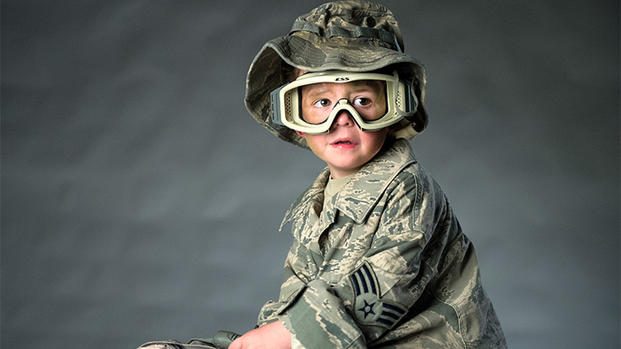 Lessons Learned from a Military Child

As a nation, we do a pretty good job of honoring our military service members. Most Americans, regardless of where they stand on other issues, are supportive of and grateful for the men and women who put everything on the line to keep us safe. But very few consider the sacrifices and struggles of one of the most underrepresented groups to pay the hefty toll in the overall cost of war, the military children.

According to the Department of Defense in 2018, there were approximately 1.7 million children who had a parent or parents serving on active duty or reserve status. In that same year, military children outnumbered our active duty servicemembers by nearly 400,000, but you rarely hear their stories.

Think about this for a second: after 20 years of sustained war, with many of the same warriors redeploying again and again, there are kids out there who have had to say goodbye (possibly for the last time) to their mom or dad 8, 9, even 10 times or more. With deployments typically ranging from 6 months to 1 year, that is a significant amount of time for a child to go without a parent. –and that’s just deployment time. It doesn’t account for time lost due to other military activities like specialized schools or lengthy training missions. That’s a ton of missed games, recitals, holidays, birthdays; you name it. And the whole time the children don’t know if they are ever going to see their mom or dad again.

But there is a silver lining: this type of struggle breeds a unique kind of mental toughness and understanding in the leaders of tomorrow. Military children often embody many of the same values as service members, and they learn at an early age to adapt, improvise, and thrive in hardships in a way that many of us will never understand or fully appreciate. To get a glimpse into this mostly unseen world, we sat down with former military children to see what valuable lessons they learned growing up in a warrior family.

Riley Gregoire of True North had this to say:

“Growing up in a Marine Corps family has taught me the importance of dedication and hard work.” She continues, “To be dedicated to a purpose, a goal, or even an idea, you must overcome unbearable obstacles to accomplish what you want… You must have grit, a tenacious mindset, and the belief that what you're working towards is worth it. Dedication and hard work lead to challenging yourself and others to be the best they can be, no matter the situation.”

“A really important lesson I learned would be knowing when to lead, but also when to follow.” When discussing family life during deployments, Cooper said, “At an early age, I had to learn when I needed to step up for my family… but also knowing when I’m not the best person to lead in a situation and being able to follow.”

Cooper also revealed one of the major, positive impacts that he gained from being exposed to the warrior lifestyle:

“Coming from a military family, I was able to be around amazing role models like my dad and many of the men and women he served with. Being around all these amazing people helped shape my brothers and me. It helped us develop a team-oriented mindset when we would face tough obstacles, instead of acting like a bunch of individuals.”

How great would your organization be if everyone, from the business leaders to associates, took these lessons to heart?

These powerful lessons came from the experiences of two people in their early 20’s. They learn so many vital lessons at an early age, and, in many ways, this puts them ahead of their peers, and even some seasoned leaders. We do a great job of recognizing and honoring our warriors, but it’s high time that we start looking at the raw, untapped value that lies in our military children.