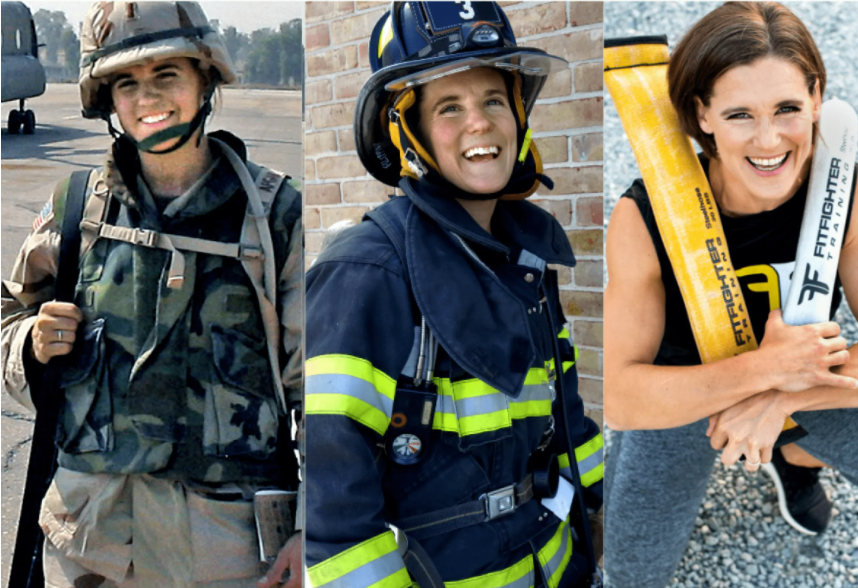 With one day left in Women’s History Month, True North got the opportunity to interview Army veteran and entrepreneur, Sarah Apgar, on her time in service and got to hear about her transition story. Sarah served 4 ½ years in the Army and is now the Founder of Fit Fighter, a world-class strength and conditioning system.

Read on to hear more about her story!

What branch did you serve in and how many years?

U.S. Army Engineer Corps, active duty for 4 1/2 years after army ROTC at Princeton. I was at Fort Carson the entire time and then attached to the 52nd Engineer Battalion with the 101st Airborne Division when we deployed.

Why did you decide to join?

I wasn’t one of those high school students that had some big aspirations about what I was going to major in in college or what my interests were going to be professionally. So, the military seemed like a great fit, and a big opportunity to have leadership, physical fitness, and team building. All the aspects of what ROTC was going to offer to me seemed compelling. I also got an ROTC scholarship to help pay for an expensive undergraduate education. My dad had also served for three years way back in the 60s in the previous Vietnam era on the German border taking East German refugees across to West Germany as an intelligence officer. So, I had this great exposure in my senior year in high school to this opportunity both financially and from a professional standpoint, and I took it. Then after a year, decided to stick it out and have that as my first profession.

Do you have a favorite memory while in service?

That is so hard. I would say my favorite broad-based memory was just the day-to-day, month to month of being a platoon leader. Being out in front, caring for a platoon of 33 men and women who are also passionate, mission-oriented, and sharing that mission, that's something I've never felt in the civilian world. In terms of lifestyle, that's definitely my favorite memory. I loved working for a company commander and having that camaraderie, that team, and it was just such a beautiful time. There are so many challenging moments with the deployments as well. I think my favorite moments during deployments would be the things that we accomplished, like the projects around posts, building sidewalks, and training areas downrange for other units. There was always a real sense of accomplishment and the great feeling of helping people. I know helping people is something that you're always doing in the military but it's more difficult if you're like a Marine infantry officer, like Greg Parsons. I think it's harder, on a daily basis, to feel the sense of fulfillment because a lot of times you're kicking in doors and finding bad guys and you're doing both different and important things, but you don’t always get the recognition. For an engineer, you just always have this really great sense of accomplishment through finishing projects.

What takeaway did you have during your service?

I would say that military service gives you a real sense of having a mission-driven approach to what you do and also having an impact-based approach. I think in the corporate world money really drives a lot of what we do in corporate capitalist culture. There's a risk, especially now, that if you're a startup or an entrepreneur, you're always looking for capital from companies or you’re trying to raise money. There's a reason for that because money equates to value in our society. There are a lot of reasons why value through money can then turn into impact but I also think that in the military there's a different sense of what value is and what mission and impact mean. The military is more about achieving goals together and working with your unit. You're part of the bigger picture of national security. Your little piece of that bigger picture is a very powerful thing and to be a part of a bigger cause is empowering. As an entrepreneur, it's hard to constantly be reminding myself and my team and other people that we are part of a bigger picture at the company.

What was your journey like transitioning out of the military?

Transitioning out was challenging for me. I definitely felt like I was floating for a while. I think that if you're used to a specific lifestyle and then you are thrust into a civilian lifestyle where you don't have that same sense of everything it can feel daunting. That was something that was really hard for me. I got out and I went to Europe for a couple of years. I was a ski bum for a little while and taught ski lessons. I eventually went to Graduate School as a way to foster a successful transition. It was definitely a big challenge.

What made you start Fit Fighter?

This is an important part of my story. When I got out of the military and had that challenging transition we just talked about, I was able to get my sea legs under me at grad school. Then coming out of Tuck I fell into a role at Warby Parker. That was my first ever mission-driven experience outside of the military. Warby had this wonderful partnership with Vision Spring where when you purchase a pair of glasses another pair of glasses is given to someone in need around the world. I loved that idea, I loved that mission, I loved Neil and Dave as founders and leaders, and I loved their vision. It was a really compelling early-stage company experience for me coming out of graduate school. Also during that time, I joined the Volunteer Fire service because I was really missing that military lifestyle. I got out of the military because I couldn't imagine staying in with the deployment cycle and I really didn’t see this being a 20-year career for me, so I thought it was a good time to get out in my late 20s. So, I joined the Volunteer Fire service on Long Island, and I learned that the fire service was all volunteer-based on Long Island. This was a really interesting opportunity to be able to stay at Warby and also have that community back in my life. It was during that time that I originally fell into the training programs and the equipment of the steel hose that is now Fit Fighters signature equipment. I noticed this was all about solving simple problems at first, that we had a big chasm between the training that was happening in the gym and what was happening up there on the fireground. I noticed there were not a lot of opportunities to train skills for firefighting so that was sort of an inspiration. I'm a curious person and I always liked tinkering, so Fit Fighter was spawned very early. It really wasn't until years after I had invented the first steel hose that I started to have trainers and coaches knock on my door and ask, “tell us more about this training” or “is this something that you deploy for personal training purposes or for other demographics or for athletes?” and it sort of snowballed. It was then that I decided that it's not something that I sort of set out to do initially but it was something that came to me almost. I felt like after a while I had no choice but to follow this potential and turn it into a company.

What advice would you give to the world today?

I would say three things: number one is this concept of curiosity. I think this is the most important human characteristic that we have. I think that if we’re curious as people, as members of communities, as parents, as business people, and as entrepreneurs, and we sustain our curiosity day after day and keep asking questions that's when great things happen. I think this concept sticks with the idea of being driven by something other than money but instead what creates value and trying to figure that out for people. That’s my shining star and my north star principle. The second is to create your village of people around you that can prop you up and support you. If you’re going to be innovative, you will fail. There are people who have nothing better to do with their time but go on Facebook and just trash you. From a personal level, after Shark Tank people on Twitter would say dumb stuff about my muscles and make comments like, “she looks like a man”. You must have this thick skin and the only way to have a thick skin is to have your group of people who support you. No human being can just bounce that off, you really must have a village of people around you that you can call on at any time and have a chat with because otherwise you could get trapped into a depression. Third, is really understanding your strengths and your weaknesses. Understanding what you're put on this earth to do and then leveraging that and realizing that you can't be everything. Be transparent about that so that you can bolster yourself up. Understanding these strengths and weaknesses will help steer you in the direction of what you're supposed to do.